You are at:Home»Older posts»backhand bluffing to success at WPT National UK 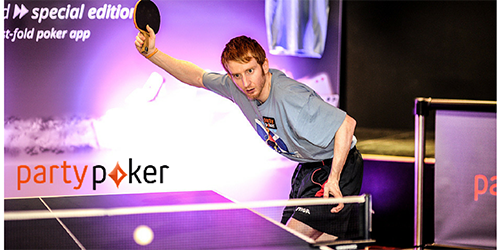 Our only advice, when table tennis Commonwealth Games bronze medallist Gavin Rumgay takes his familiar stance behind the table, is to stay well clear or risk losing an eye.

Gavin is among the world’s top six table tennis players and currently stands atop Scotland’s table tennis mountain, ranked as the nation’s best.

The 30-year-old Scotsman has graced partypoker with his presence this weekend at Aspers Casino for WPT’s National UK poker extravaganza. And he’s showing off his sensational skillset in the partypoker lounge.

His most memorable moment came in the 2013, when he became the first Scotsman to medal in the table tennis discipline at a Commonwealth Games.

The recipe for success, Gavin says, is extreme focus, unwavering concentration and a diligent work ethic, which ticks many of the same boxes required for success on the felt.

The world’s best poker players know how, and when, to bluff. And while bluffing is usually solely related to the world of poker, Gavin’s backhand bluff is renowned the world over.

“You think he’s going to hit it hard down the line and he just bluffs it short.”

It looks like table tennis and poker have more in common than first thought.

Gavin, in between his trick shots at partypoker events, is preparing for his next big challenge, the Scottish National Championships, which kick off on 7th March in Perth.

He looks forward to backhand bluffing his way to a 10th Scottish championship, hoping to pit his skills against long-time rival Craig Howieson.

Can you think of any other similarities between the two sports?