It’s the news you’ve all been waiting for, the confirmation that Dusk Till Dawn is hosting the 2015 partypoker WPT UK Festival, and this time it gives players more choice and flexibility.

At least £2.5 million is set to be paid out during the 16-day festival and players from far and wide are expected to descend on the United Kingdom in an attempt to become a WPT champion and become part of the exclusive Champions Club.

Kicking off the 2015 WPT UK festival is the eagerly anticipated WPT500 and its gargantuan £1 million guaranteed prize pool, a huge sum in its own right never mind the fact the tournament only costs £500+£50 to buy into!

As with previous editions of the WPT500, there are several Day 1s – 12 in total – giving you ample opportunity to reach Day 2 and beyond.

Four starting flights take place online at partypoker, with another five hosted at Dusk Till Dawn, and for the first time in WPT history, Aspers Casino in Stratford, London is running three Day 1s in its amazing venue.

Day 2 kicks off at 2:30pm on Monday 2 November with the champion being crowned on November 3.

The £2,200 buy-in £1 million guaranteed WPT UK Main Event commences on November 3 with the first of two starting flights. Players who bust on Day 1a can re-enter on Day 1b on November 4, but players who are eliminated on Day 1b cannot re-enter, making the final flight a freezeout in the traditional sense. The final table plays out on November 8.

In addition to the WPT500 and WPT UK Main Event, there are some superb side events to get stuck into, including a live-streamed Super High Roller costing £10,000+£250 to buy into.

Rob Yong, owner of Dusk Till Dawn, said of the upcoming extravaganza:

“Last year’s WPT was brilliant and will be a hard act to follow but with WPT, partypoker and Dusk Till Dawn, we have unique combination of online, live and event management expertise so I believe we can improve on last year, specifically by qualifying over 300 players for the Main Event, giving us a chance of breaking the record for a WPT in Europe. It’s a pleasure for me personally and the DTD to work with WPT and partypoker and I am looking forward to developing our relationship with Aspers and really hope their Day 1’s for the WPT 500 will be a success.” 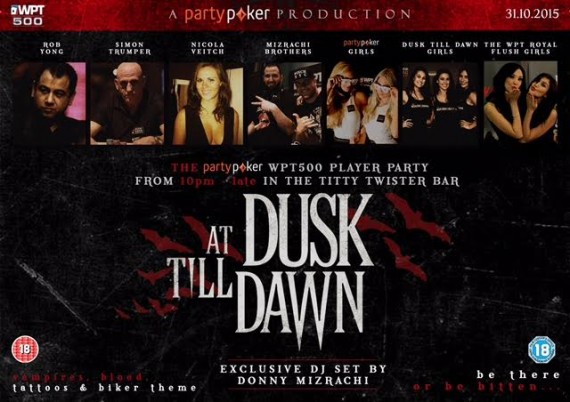 As you know, Saturday 31 October is Halloween so partypoker thought it would be fun to run a Halloween-themed fancy dress competition. There will be a prize for the best costume, with make-up artists on site to help put the finishing touches to your masterpiece, plus a fake tattoo competition (tattoos will be provided!) in addition to a themed bar, DJ Mizrachi playing an exclusive set and even the famous DTD girls are getting in on the act and will be in their own fancy dress costumes!

Keep up to date with the all things partypoker!