You are at:Home»Older posts»Tony G: 1000 euro tip to a waiter 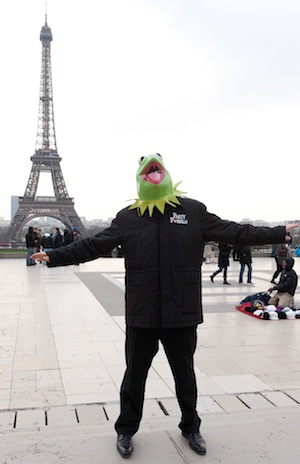 If you’re in Paris with Tony G, however, it means to be along for one heck of a ride. Tony G doesn’t just visit Paris, he owns the town when he’s there.

Paris is, after all, the city that made him famous, where at his first WPT final table Howard Lederer refused to shake his hand and at his second final table the world recoiled in horror.

Paris is where Tony refuses to stay anywhere but at the palace called the George V. It’s where he gives a 1000 euro tip to a waiter.

The town where fuelled by countless bottles of wine he rushes back up onstage at the European Poker Awards and declares that he has to say just one more thing.

The town where he eats well, drinks heavy, and has the poker world watching his every step. Where he dons a Kermit the Frog mask at the Arc de Triumphe and follows around the nuns.

And if you’re with him at his favourite café, he says over and over between puffs so that you cannot miss, “I smoke the shisha and I drink mint tea.” Like it’s a philosophy of life. And for Tony G perhaps it is. Paris is a place well suited to Tony G so it’s no wonder that it is also a place where he will always be welcome.

I caught up with Tony G at the café, at the George V, at the European Poker Awards, and at the Aviation Club. I followed him deep into the night. I hung on his every word, because you think maybe, just once, he’ll break character and reveal the real Tony G.

But maybe what you see is what you get. The real Tony G has a problem with Putin, wants a rematch with Isildur, has disdain for French poker, and is generous beyond belief. Paris is the one city big enough to accommodate the real Tony G. Bring on more Russians.